Muness blogged a photographic introduction to the Relevance mothership, and Glenn Vanderburg went all meta on us and asked what we could learn from comparing the books in active use on the desks to the less fortunate books relegated to use as monitor stands.§

The JDBC API Tutorial is just as interesting as the 2008 Sam’s Club Office Products Catalog. 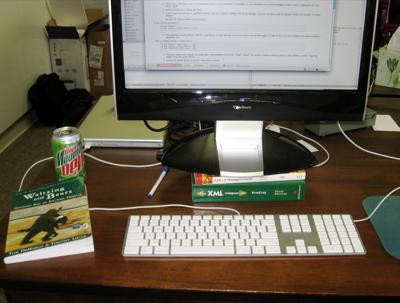 We’d rather wrestle a grizzly than read even one more paragraph about XML.

Well, Glenn, in geek terms, it’s safe to say that if these books were elements in an LRU cache, they’d be purged by now. As for the technologies referenced in said books, I find it interesting that they all have one thing very much in common. By and large, we simply don’t need to think about them as much as we once did. Some certainly remain more relevant than others, but thanks to abstractions (and abstractions built on top of those abstractions), we just have no need to wade through the plumbing of technologies like JDBC. That’s (thankfully) the job of a good framework.

What’s under your monitor?