How does a good developer become a great developer?

Forget greatness for a moment: How does a decent developer become a good developer?

There is no definitive path from Step 1 to Step n. Heck, it’s not even clear what Step n is. And as logically-minded developer types, the lack of a well-defined route can make for a daunting journey from novice to master.

I’ve spent a fair bit of time over the last few years bumping up against this conundrum. What’s next? How do I go from being a good developer to a being really good developer?

I do my best work when I have a goal with clear, measurable criteria for success. For example, I want to run a 5-minute mile. Okay. That’s easy to measure, and success is well-defined. I can figure out how fast I can run a mile now, and the Web is full of advice and training programs for getting faster. I can choose a training program, work hard, and I can be confident that I’ll eventually get where I want to be. And it’s so wonderfully measurable that, every week, I’ll know just how close I am to my ultimate goal.

But how do you measure whether you’ve attained the rank of “really good developer?” In short, you can’t. That goal, as stated, is too subjective, too vague, and is simply not measurable. So how do we find something that is measurable?

We’ve all had specific experiences that clearly advanced our skills as developers. We’ve learned a new language that exposed us to a new way of thinking. Or we crafted the perfect design, only to watch it unveil its gross imperfections in the harsh realities of a production environment. And we became better programmers because of it. Some experiences equip you with new techniques. Others expose you to anti-patterns…and allow you to understand why they are anti-patterns. It’s these experiences that teach you, that influence your thought process, that influence your approach to problems, that improve your designs. And conveniently, it’s simple to measure whether you’ve gained a particular experience. (It might be fun to think of them as achievements.)

So it took a while, but I’m becoming more comfortable with the immeasurability of my pending goal: earning the rank of “really good developer.” If such a developer earns this distinction because of his experiences, then maybe we can still have a well-defined path marching in the general direction of “really good developer” and beyond. I suspect that path looks something like this:

And what better way to get started with Step 1 than to crowdsource it? Here’s a first cut at a list of programming achievements, loosely organized into groups. I’ll offer multiple ways for you to chime in with your thoughts at the end. 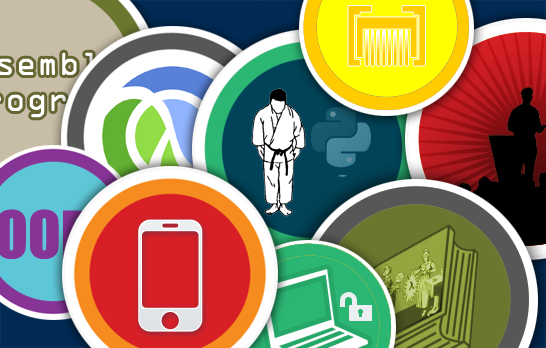 Learn a variety of programming paradigms:

Experience the ins and outs of programming for different platforms:

Enhance your understanding of the building blocks that we use as developers:

Enlighten yourself with koans, katas, and the wisdom of ages:

Program in the open:

Learn by teaching others [C]:

Now, let’s go meta for a moment. Note that each of these achievements is measurable. Each one is Boolean: you’ve either completed it or you haven’t. For example, it’s hard to measure whether you’ve learned a functional language, but it’s easy to know whether you’ve written an app in a functional language. The latter is observable. Measurable. Boolean. This measurability applies, quite intentionally, to all of these achievements.

Admittedly, the measurability isn’t perfect. Consider the achievement of presenting at a conference: you could certainly do a half-assed job just to say you’ve earned this achievement. But if you’re reading this post, I assume you want to be excellent. You know that it’s lame to phone it in just to cross an item off the list.

Since we’re talking about improvement …

Since we’re talking about improvement, what would you change about this list? What experiences have made you a better developer?

The list is available as a gist on GitHub. Feel free to fork it and add more achievements. (Make sure they’re measurable.)

Or, fork it and mark off the achievements you’ve already conquered. You might even flag the one that you’re currently working on. (For example, check out these forks from Justin Blake, Pierre Chapuis, and Yann Esposito.) [E]

What achievement will you unlock next?

[A] I can’t emphasize Step 4 enough. To get the most out of each achievement, you owe it to yourself to pause and reflect on the experience before you move on to the next one. Introspect. Ask yourself what you learned. Take the time to write down those thoughts. And even better still, share them with someone else and see how your learnings compare to other people who’ve also earned this achievement.

[B] Forth is essentially its own paradigm.

[C] This quote comes to mind: “Whoever teaches learns in the act of teaching …” — Paulo Freire

[D] Nathan Hwang has developed and open sourced a tool for visualizing and tracking your journey through these achievements.

Thanks to Michael Parenteau for providing the artwork for this post.

Thanks to Michael Nygard, Glenn Vanderburg, Alan Dipert, and Vojtech Rinik for providing feedback on drafts of this post.