The inaugural Groovy/Grails Experience (2GX) is in the bag, and as much as I was looking forward to it, it honestly exceeded my expectations rather significantly. The sheer enthusiasm for Groovy (and Grails) in the Java community is almost palpable. 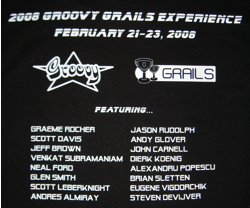 The event capped off with a new installment of Relevance’s Refactotum series. Jay Zimmerman (Director of 2GX and the popular NFJS Symposium Series) was kind enough to dedicate the final afternoon of the conference to this unique session demonstrating the ease of contributing to open source, followed immediately by a workshop for putting those techniques into practice. Coming out of the Refactotum, we had a widely diverse set of contributions, all of which make meaningful improvements to Grails. The resulting set of patches involve increasing test coverage, refactoring for readability, boarding up broken windows, reducing complexity, and a handful of other improvements as well. And perhaps the most rewarding part (for me, at least) of the three-day conference was talking to the several people that stopped by afterward, each to express that while they had never before understood just how easy it is to get involved in open source, now they know, and each seemed downright eager to contribute!